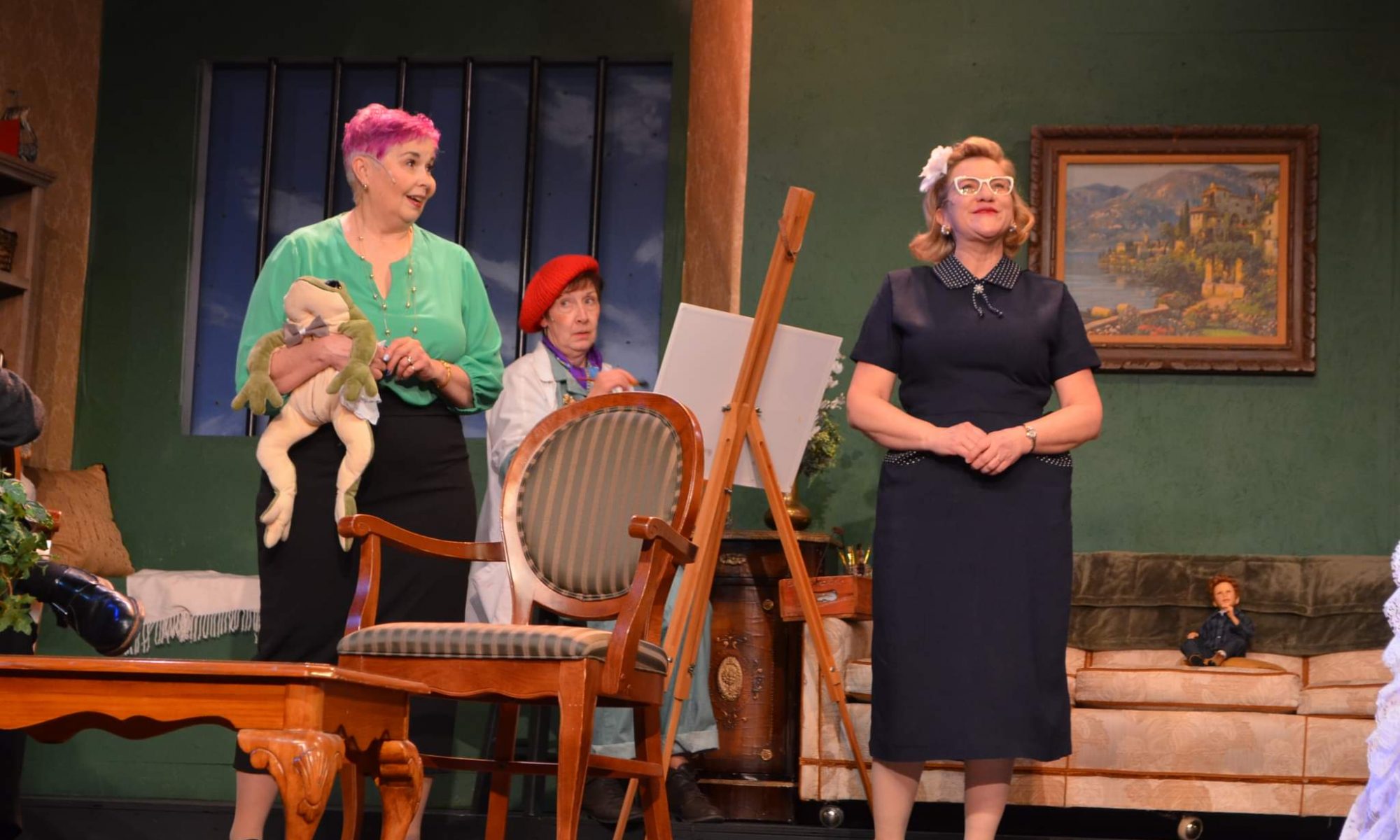 The Curious Savage makes a rare stop at the Heritage Theater in Perry, Utah, proving the show’s deserved place among classic comedies that quietly hold up and remain relevant in today’s loud and contentious world. If you snag a laugh on precise wordplay, enjoy a subtle truth spoken with a smile, or need a reminder of a gentler, kinder manner in a still-ruthless world, then the directing team of Justin “Spot” and Amber Beecher have found something just for you. But, hurry and book this ticket because word of this delightful show will spread quickly. This performance run will close on February 4th.

The Heritage Theater provides a quality and veteran cast ready to transport you back to a simpler time when delicate topics such as what will we do with mother now that she has gone ‘round the bend, were treated, well… delicately. This hilarious show centers on the Savage children (step, in this case) who have other fish to fry in their own personal lives and would like to quietly deposit their mother in a private home, The Cloisters. Accomplishing this quickly will make the lives of the oh-so-important Savage siblings much better and free them up so they can get on to their next misadventure. Oh yes, and spend the fortune that their late father had amassed in his lifetime. Such things were seemingly a straightforward task in 1950 when this play penned by John Patrick first appeared at the Martin Beck Theatre in New York, just as it should be even today. Or maybe not. Enter: Ethel P. Savage. Exit: Well-laid plans by the Savage children. Let the gamesmanship begin as our story unfolds…

From the moment Mrs. Savage (Nancy Baker) makes a reluctant entrance into The Cloisters’ living room, she commands the stage. Residents of the home (not an asylum) have their own varied idiosyncrasies but harbor a healthy curiosity about the soon-to-be resident and are innocently eager to get to know this mysterious new guest. The Savage children are also in the room awaiting her arrival so they can cross this necessary event off their individual task lists for the day. When Baker steps into the room as Mrs. Savage, her children cower. There is no mistaking where the power truly lies here. Mrs. Savage is indeed a curiosity for the rest of the performance as Baker takes her character through a confrontational (and funny) poignant moment with family in a place she had no intention of being, to a caring, benevolent, and kind soul who aims to find the right word to embrace the residents she is now mixed in with. At the end of the evening, you will come to know that Nancy Baker has found her role.

Lee L Perry in the role of Titus Savage captures all that politician-goodness that we have grown to love over the years as he embodies his character. He is a take-command, stop-at-nothing, self-serving Senator who intends to tuck his now-distracted stepmother into a quiet and private walled-in facility, where he will not have her underfoot. With his father’s passing, the Senator can now stifle the bad press Mrs. Savage had unintentionally been receiving by financially backing, writing, and acting on the New York stage to create her own career as an actress. Perry blusters well, sulks just enough, and commands at will everyone except his stepmother. I found Perry’s stage presence perfect for the role. He makes a delicious villain.

To round out the evil trio of Savage children, Lily-Belle played by Sarah RH Lynch, and Samuel (Dani Baysinger) bring the bacon to a sizzle, each in their own respective way. Lynch, a theatre teacher at Ridgeline High School in Cache Valley, shows us glimpses of weary exasperation as she glides through mother-daughter relationship issues and memories just below her surface while navigating the choppy waters Lily-Belle’s romantic life seems to invite. Lynch’s Lily-Belle character holds her own, more or less, with Mrs. Savage. But, again, there is no mistake about who is ultimately in charge. Baysinger, meanwhile, takes his character of Samuel to a safer spot away from his two more colorful siblings. The actor’s portrayal choice here seems to be of a man well on his way down the Savage path of ruthlessness, but not quite as eager for a spotlight. The mixture of these three adult children is uneasy and we can guess that they do not socialize in the same crowd often. A pecking order is obvious.

The staff at The Cloisters are Dr. Emmett (Darin W. Draper) and Miss Willie played by Emma Olson. Olson’s Miss Willie is the glue that keeps the sanatorium calm and collected day to day. Olson projects a friendly demeanor to all without inspiring chaos amongst the residents. While she performs the functions of a nurse, Miss Willie has a happy sadness to her and throughout the evening you know things will end well under her guidance. Draper’s Dr. Emmett, however professional, brings an almost part-time, glad-to-be-here but also glad-to-go-home attitude that was almost at odds with Miss Willie’s calm and caring nature. Oh, wait. I may have just described a doctor. Draper’s characterization may have been exactly what the doctor ordered in this case.

And now on to the residents of The Cloisters. Before Mrs. Savage arrived, there was a family of five in residence. No, they were not biologically a DNA match, and each personality differed greatly from the others. But they provided the beating heart of this group home. Through the evening, you will get to know and love each one of these characters someone had parked in this facility. Each had their own life story interrupted by one thing or another and when the page turned, these five found themselves in this place. As the story begins and Mrs. Savage arrives, five individual existences must welcome a sixth into their innocent nest and make room for her individual orbit. Little do the residents know how their own lives will change with the addition of the curious Mrs. Savage.

Florence (Raina Jones), is every bit the mother figure in this group. Jones captures a gentle, distracted maternal instinct as she ensures everyone is comfy and non-confrontational as she observes and attends to the emotional needs of others. Florence, cat-eyed glasses, and all is wrapped up in caring, all the while keeping her own isolation and respecting theirs. Occasionally, Florence loses track of her one significant loss in life, an event that landed her in this place. The other residents love her for that devotion.

Fairy May (Mellissa Thomas), is an unkempt innocent whose goal is to please others and yearns to hear kind words spoken. She deals with what is today considered self-esteem issues and wants desperately to matter to someone. Here at The Cloisters, she matters-and everyone knows it except her. Thomas’ portrayal is soft and non-confrontational, delivered with a heart consistently displayed on her sleeve. The choices Thomas makes with the character keep her fresh but do not step out too far, too early.

Jeffrey (Quin Geilman), is the mystery man of the house. What ailment could have placed him among the residents here? Geilman plays his role with subtle confidence in the character’s ability to hide from the world. From the perspective of an audience member there is never a doubt that Jeffrey will emerge from his self-imposed cocoon and take flight in the world again. But from inside Jeffrey, looking out, the future is not nearly so well-focused. Geilman does an exceptional job with this role of a fish not so much out of water, but at the wrong depth.

Mrs. Paddy (Gena K Lott), will tell you loudly what she hates. She will sometimes show you what she paints. But she won’t talk. She has picked up a few bad habits while in The Cloisters, but it seems she also returns them. This play doesn’t need a lot of extra help in getting the audience laughing, but an extra big scoop of happy comes from Lott’s depiction of this resident. Lott’s comedic timing and rapport with an audience is a constant pleasure.

Hannibal (Jesse Boyce), lets the audience take part with the residents when an alarm goes off unexpectedly. Do not be caught eating or drinking when this happens—I speak from experience. Boyce also brings his musical gifts to the stage in a tour de force that will help explain why his character lives where he does. Did I mention idiosyncrasies? Remember that they wrote this play way before mansplaining was a thing, but you might discover during the performance that there is a little Hannibal in all of us. I thoroughly enjoyed Boyce’s adaptation of this role, and I expect you will.

There are important gems of truth sprinkled throughout the dialog of this show. There is also a special non-verbal character that leaves you with a wink at the end as a tribute to special performers and community theaters we have known and loved. You might find Easter eggs throughout the performance that pay homage to other shows that have gone before. This show is ready on its own and brings a loving, quiet charm. Love. Acceptance. Family. Sure, the play is quietly hilarious and sneaky good—you are going to like that too. Don’t miss the chance to see this funny, touching play that is as pertinent today as it was when it first debuted on Broadway. Tonight I watched an audience of young and old, of all ages, thoroughly enjoy a classic comedy. I would not be mistaken to say the experience touched this audience. You should see this show. Take someone that you love.

Steve Odenthal is a Playwright, Humorist, Writer, and Patron of the Arts. Theatre is a great passion and with this website he hopes to promote thought and discussion (not soundbites and crusades) pertaining to what goes into great theatre at all levels. A playsright's alley is that spot in the production where communication between the Playwrights and Directors can come to grips with their respective visions.
View all posts